SPECIAL FEATURE: Reconstruction from the 2011 Tohoku Earthquake and Tsunami, and New National Spacial Strategies under the Condition of Population Decline 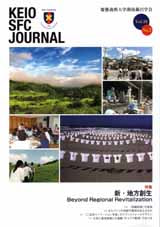